Pan Am: Lighter Than Air

Pan Am Lighter Than Air Did Pan Am ever consider airships? It was an exciting day in Miami when the Graf Zeppelin arrived in October 1933, on a journey from Rio to Chicago for the Century of Progress World’s Fair.

Caption: The “Graf Zeppelin” arrives in the United States on October 23, stopping at Miami, Florida, known as the “Aerial gateway between the Americas” because of the extensive operations of the Pan American Airway System there.  The city is only one day’s travel from New York by the Eastern Air Transport Company.

Caption: “The best landing field for the Graf I have ever seen,” said Dr. Hugo Eckener, commander, after the big airship made an easy landing at the broad Miami field on its first visit to the port, which is northern terminal of the Pan American Airways System.

Newspaper photographer Gleason W. Romer, in suggesting a caption for his photos, noted Miami’s air connections now stretched from New York via Eastern Air Transport down to Latin America ia Pan American Airways — with the implication that transoceanic airship routes might now link them all together. It wasn’t a farfetched idea at all. 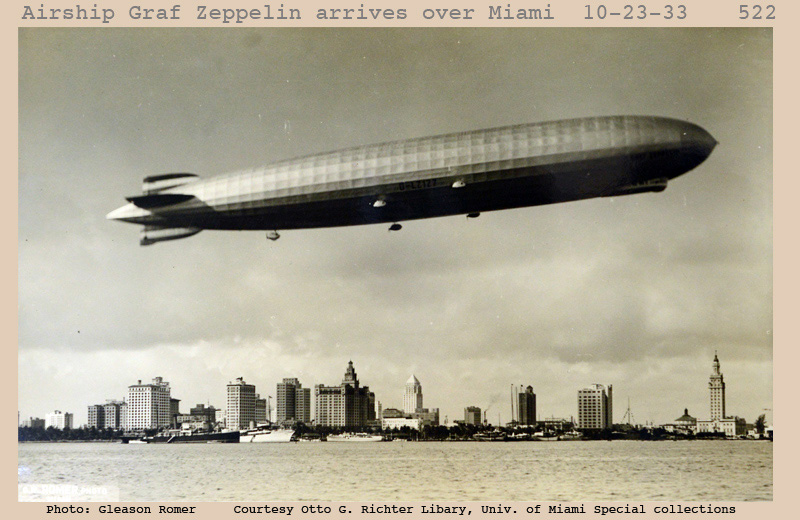 Did Pan Am ever consider airships? Looking back at the evolution of commercial air transport from a post-Hindenburg crash perspective, it’s easy to dismiss the thought that Pan American might have wanted to use them. Long into the time of long-range Sikorsky and Martin flying boats, rigid airships were carrying passengers in luxury across the oceans at very respectable speeds, and Juan Trippe kept informed of proposed airship companies, such as the Atlantic and Pacific Airship Company and the Pacific Zeppelin Transport Co. Ltd.

During a July 1928 meeting in Havana with Pan Am colleagues and Juan Trippe, at a time when the fleet consisted solely of short-range Fokker Tri-motors, Andre Priester reportedly said, “What this company needs is blimps!” Company records still contain a detailed memorandum for a proposed Atlantic Airship Company dated that very year.  Some of Pan Am’s important stockholders had shares in the Pacific Zeppelin Transport Co. Ltd., and Juan Trippe was on their board.

And if you look closer at the history, it doesn’t seem so far-fetched. As far back as 1920 — a year after the first tentative crossings of the Atlantic by airplane — pundits were discussing long-range ocean crossing by lighter-than-air ships.  Before the end of the decade, the Graf Zeppelin had flown around the world.  American interest in airship technology was spurred by the U.S Navy’s investment in the airships USS Akron and Macon. In the early 1930s and beyond, ideas abounded for commercial ventures to link far distant shores using airships.  After all, airship construction and operation seemed to offer sound investments. By late 1936, Juan Trippe himself had had a positive experience with luxurious airship travel, when he and his wife Betty flew across the Atlantic on the airship Hindenburg, returning to the western hemisphere after an extended global Pan Am tour.  Betty Trippe, an accomplished photographer, took personal photos of the Hindenburg flight.