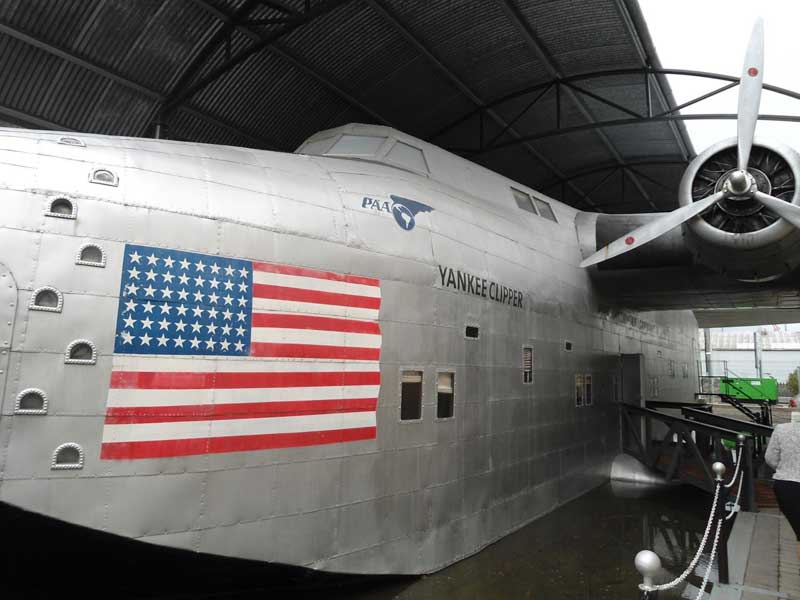 I sat in the pilot's seat of a Boeing B-314 and imagined Captain Ford preparing for take off on what is called "The Long Way Home." It would be the most challenging flight of his life. Pearl Harbor had just been bombed and he and his crew were stranded in New Zealand, unable to fly back to their San Francisco home base.

They had orders not to let the flying boat fall into enemy hands and to try to get back to the USA. They were about to fly west to Australia, across the Indian Ocean, the Middle East, Africa, and the South Atlantic to Brazil and then north to New York City. Captain Ford was 35 and in command of one of the world's most advanced aircraft, one of only 12 built. I tried to imagine all the thoughts going through his mind.

Then I stood at the large navigation table and felt the shiver of uncertainty of navigating without a full set of charts that ran through navigator Brown's mind. I sat at the engineer's post and imagined the apprehensions he had about the maintenance of the planes mighty engines, getting adequate fuel, and a hundred other potential problems he would have to solve with minimal resources.

Back in the pilot's seat I felt the presence of Captain Cone as he wondered why this two plane, two-week mission in 1943 was so secret and so important. Just before take off he found out his passenger was Franklin Delano Roosevelt, President of the United States. He would fly this mission the same as every one of his flights: calmly, professionally and skillfully. Their destination was Africa where FDR would meet with Prime Minister Churchill at Casablanca.

I went below and sat in the seat FDR occupied on the return trip. I imagined his surprise and pleasure when presented with a birthday cake.

I went aft to the tail cabin where two young project engineers met during a test flight in 1938 to discuss the plane's shortcomings. Pan Am's John Leslie told Boeing's Wellwood Beall, the aircraft was not acceptable. The problem was it would bounce back into the air when touching down. I imagined their mutual distress that this badly needed aircraft was to be delayed yet again. What could they do? The solution turned out to be simple: add 20" inches to the flying boat hull's step position.

I went back to flight deck and imagined the inaugural flight to New Zealand in 1939 with Leslie "kibitzing" on the ample flight deck as they approached Auckland in uncertain visibility and position. He suddenly exclaimed, "There's your land, boys," as he spied the long white cloud bank up against the mountains.

I walked through the main cabin, no one else at all in sight, I imagined the passengers and crew who had just departed after an 18 hour flight. I sat down in a seat and recalled the nine year old boy I had been when the last B-314s came and went from the Marine Air Terminal at La Guardia, where my father, John Leslie, had his office.

Where was I that day? I was visiting the Foynes Flying Boat Museum in Ireland, near Shannon Airport

Of all the marvelous displays at the museum the crown jewel is the full size reproduction of the Boeing B-314 fuselage and tail assembly. From the street you see the iconic three vertical stabilizers, the empennage, to be technical. From inside the museum you walk out as if onto a dock. The wing and an engine loom over you, you step onto the sponson and enter the cabin. The only thing missing is the Pan Am steward to greet you. Otherwise, every detail is a faithful reproduction of the seats, fabric, molding, paint color, etc., everything is perfect. The flight deck looks like it was in use just minutes ago as the flying boat alighted on the Shannon River.

This was the greatest sea plane of its day; you feel that grandeur, the record shattering plane, its elegance as well as its work horse quality. This was the world's best and biggest transoceanic aircraft, capable of carrying personnel and materiel around the globe.

The Foynes Flying Boat Museum is the brainchild of Margaret O'Shaughnessy who got it up and running and still runs it today. It celebrates all the flying boats of the era and makes the adventure, the competition and pioneering of those days come alive as the flying boats of the USA and European countries struggled to cross the Atlantic with commercially successful designs. Their feats were headline news around the world.

The museum has an enchanting scene where passengers arrive in the airport lounge after a long and bumpy ride across the ocean and ask for a cup of coffee. One suggests something a bit stronger and the chef spontaneously concocts the brew we know as Irish Coffee. The actors are holograms, but the scene is so real you feel you could sidle up to the bar yourself and order an Irish Coffee.

Landing at Shannon to start a trip to Europe is attractive from a number of points of view. We got a good fare, spent a morning at the museum, stayed at Dunraven Arms in Adare "the prettiest village in Ireland," where Pan Am personnel often stayed. We visited Limerick, a city with a history going back to the Norse invaders. Thanks to Ryanair and Aer Lingus there are ample connections to the rest of Europe. A bonus on the return was speedy clearing US customs and immigration at Shannon Airport.

Photos: A visit to the Foynes Flying Boat Museum