The Pan Am Historical Foundation thanks you for all your support! It has has led us to the culmination of this amazing project with Moreno/Lyons Productions

Free with Amazon Prime or Purchase:

On Apple iTunes via PBS Digital: 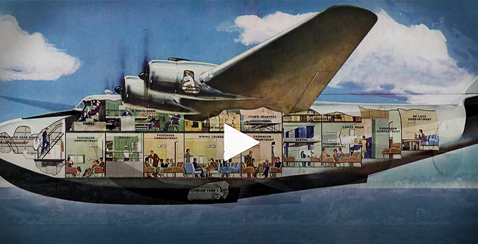 “Across the Pacific” is still being aired on PBS stations across the nation.

2. “Latin Laboratory”.
Pan Am builds larger flying boats and harnesses radio for navigation as it dominates service to Latin America. Juan Trippe’s plans to cross the Atlantic are dashed when Britain bars his planes from landing. So he sets his sights on the Pacific instead.

3. “Another Ocean”.
Defying the skeptics, Pan Am builds an airway to Asia, allowing the China Clipper to hopscotch across the world’s widest ocean by landing at five stepping stone islands: Hawaii, Midway, Wake Island, Guam and the Philippines.