WALES AND BROTHER FLY OVER CANAL AND INCA RUINS
Radio Used by Prince; Party Lunches Over Andes
PRAISED BY PRINCES "The Prince, long a flying enthusiast, arrived in Cristobal accompanied by his brother and embers of the entourage February 6th. The party was met by an official reception committee made up of representatives of the British, United States and Panamanian governments.  One of the members of the official reception group was Mr. Allen F. Winslow, member of the Fireign Department of the Pan American Airways.

After an exchange of formal greetings the party was transported to France Field i a fleet of United States Army automobiles led by an escort of motorcycle policemen.  On arrival at the field they were met by General Brown and taken on a short tour of inspection.

Two Pan American tri-motored Fords with engines idling awaited them in front of the company station.  After a short inspection of facilities and the personnel the party boarded the planes.

In addition to pilot and co-pilot both planes carried a steward and radio operator.

During the course of the flight the Prince was asked whether there was any message he wished to send his friends in the other plane.  He asked for a radio blank and wrote a radiogram to his Diplomatic Secretary, the Hon. Lloyd Thomas, whose arm had been injured in a polo match in Kingston. The message read: ”Lloyd Thomas hope your arm is feeling very much better.” A few seconds later he received a reply saying: “Thank you very much Sir arm feeling splendid.” 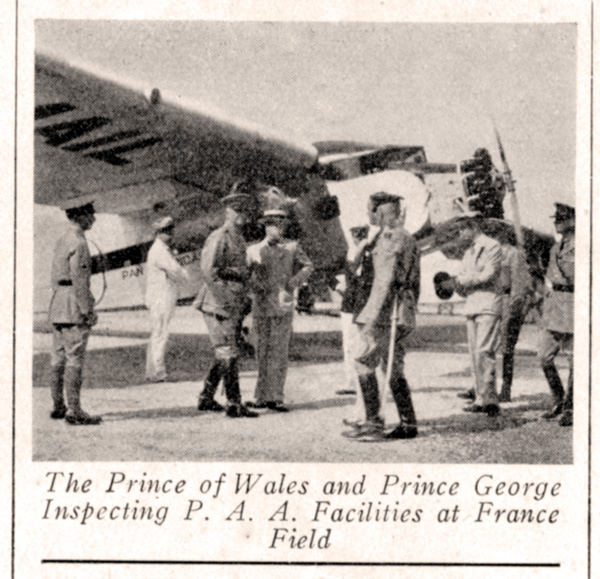 On completion of a short stay in Lima the two Princes boarded a Pan American-Grace Airway tri-motored Ford piloted by Home V. Farris with Earl Robitaille as co-pilot, bound for Arequipa.

The plane and its royal entourage departed from Las Palmas military air port at Lima at 12:15 P.M. and arrived in Arequipa at 4:48 P.M. escorted by two Peruvian military planes. An ice box and a cook stove were installed in the plane, for keeping refreshments cool and preparing meals. Luncheon was serviced on the plane during the picturesque flight.

On alighting from the plane the Prince congratulated Pilot Farris and told him it was the longest non-stop flight he had ever made in his life.

The Prince congratulated officials of both companies on the splendid manner in which the flights were carried out.”